Welcome to my blog 'Solo Dungeon Crawler', addressing all your solo dungeon crawling needs, in particular, showing you how to play Dungeons and Dragons solo, as a one person unit, without a Dungeon Master, completely by yourself. My aim is to make this experience as fun and immersive as possible.

In previous articles, I covered the basics of choosing a rule system, creating a character, mapping out a random dungeon on the go using graph paper, how to handle combat scenarios and how to track time. I'm going to build further on this simple system by introducing a means of adventuring outside of the dungeon, in the wilderness. Let's get going.

To build wilderness from scratch I need to find a random way of generating it, which makes logical sense. Luckily, I already know of such a method. If I cast my attention back to 1979, Gary Gygax and Mike Carr created the Advanced Dungeons and Dragons Dungeon Master's Guide. On the back pages there is an appendix section, and Appendix B gives a great example of how to generate random wilderness terrain.

The random terrain determination system works with ease for a one space equals one mile or larger scale. When using it, common sense must prevail. As the party (or single character) enters each space a d20 is rolled and a corresponding terrain type is chosen from a table, which is based on the terrain type the party or player is currently on.

To do this, I basically read down the column until I find the line where the random number generated falls and simply move left to determine the terrain that predominates the new space. If a pond is indicated, the terrain it is in is the same as that of the previous space. If a depression is indicated, I must decide as to it's nature and extent. The terrain it is in must be the same as the previous space. The depression in a marsh is some form of lake.

A terrain guide is included in the appendix to help determine specific types of terrain. i.e. A plain can be a tundra, steppe, savannah, prairie, heath, moor, downs or meadow. 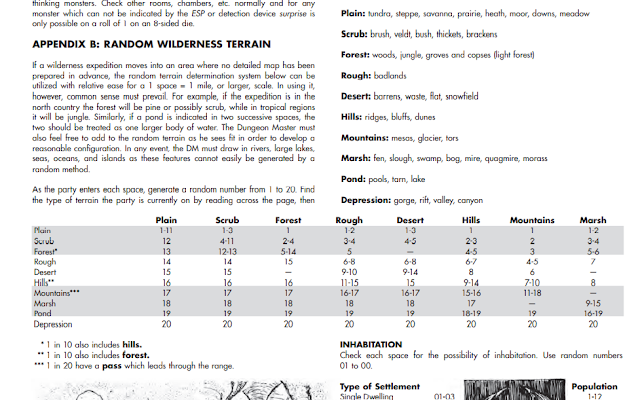 To generate random terrain I start by copying the information outlined in Appendix B of the AD&D Dungeon Master's Guide into my notebook. A PDF version of the table (which I have developed further) is available here for your own use: Solo Dungeon Crawler Wilderness Generator

There are three asterixis included in the terrain generator. These explain that 1 in 10 forests also include hills, 1 in 10 hills also include forest and 1 in 20 mountains have a pass which leads through the range.

I also copy the terrain guide into my notebook (this is also included in the Solo Dungeon Crawler Wilderness Generator). Depending on which terrain type I am in, this terrain guide will be useful. Things like the surrounding terrain, the predominant climate and my own imagination will dictate whether a forest is a simple woodland, or a dense jungle, or whether the hills are bluffs or sandy dunes. The guide will help to differentiate things a little bit and help prevent the hex map from becoming too uniform.

To show you how this works in the context of a solo DnD campaign I'm going to provide an example.

I will start by making a terrain key in my notebook (this is included in the Solo Dungeon Crawler Wilderness Generator), so that as I map the wilderness I know what each hex represents. 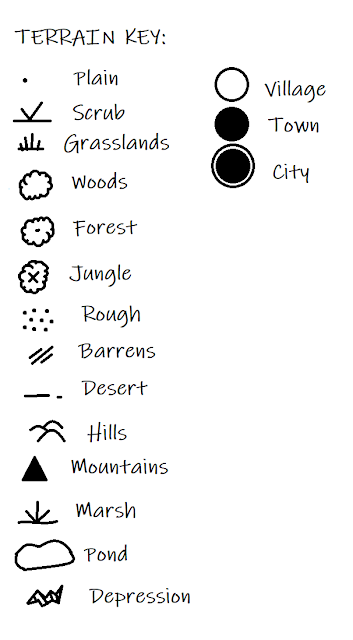 The way you choose to mark your terrain on your own hex maps is entirely up to you. The terrain key I made isn't exhaustive but should give you an idea of roughly how to mark the hex map appropriately. I've tried to split mine into the categories listed in the Terrain Guide. I would recommend the use of coloured pencils to ensure the different types of terrain really stand out.

Next I consult the Random Wilderness Generation Table (I've added some numbers down the side so I can roll a d20 to determine the type of terrain I will start with). Just like the random dungeon generation method, I recommend starting in the centre of the hex map.

I will roll a d20 to determine the terrain to start with. I roll a 20, which indicates a depression. I will lookup depression on the Terrain Key (it's a zig sag shape), so I will draw the zigzag shape on my hex map. I will assume that the depression will be in a plain, I could also roll again on the table to see which type of terrain the depression is in if I wanted to. This depression could be a gorge a rift, a valley or a canyon. I roll a d4 to determine this at random and the die indicates the depression is a rift, which is a large crack or split across the land, perhaps this could have been caused by a mighty creature or it's the effects of a powerful spell which was cast in the distant past.

Let's say I want my party to travel north from the rift and I want to find out what the party comes across next. I will roll again on the Random Wilderness Terrain table. The rift is more of a feature than a terrain type so I will roll again on the left most part of the table to determine the initial terrain type in the hex to the north. I roll a 7, which means the terrain type in the north hex is rough. I glance at my Terrain Key again and I can see the symbol to represent rough (some diagonal slashes). The party travel north from the rift in a plain into a rough.

I want my party to move northeast now, so I will roll on the Random Wilderness Table in the 'Rough' column next. I roll a 6, and 6 to 8 indicates that the terrain to the northeast is still rough terrain.

I want my party to move south next. I roll 11 on my d20, lookup the result on the Rough Column and move left to determine the terrain to the south. 11 to 15 indicates hills. The terrain type of hills has an asterix next to it, which states that "1 in 10 also includes forest". I roll a d10 (a roll of 1 would indicate that the hills are in a forest), but I get a 5, which means the hills are not in a forest. The Terrain Key depicts hills as little bumps, so I draw them on my hex map to mark the hills.

Getting Lost and Encounters

In terms of movement, to find the distance travelled in a single day, divide the normal movement rate by 5. The result is the number of miles travelled in a normal day.

For example, a character who moves 90' per turn in a dungeon, travels 18 miles per day in the wilderness (90 / 5 = 18). The slowest movement rate in a party determines the distance travelled in a party.

Terrain affects the rate of travel, this may be an increase or decrease to the number of miles moved per day. I will cover more on this topic in a future article.

Characters may forage while travelling by slowing their movement rate to two-thirds the normal speed. Foraged foods include nuts, berries and small game. Characters usually have a 1 in 3 chance of finding enough food to survive. This may be modified due to terrain.

Characters can also hunt. If a day is spent without moving then normal foraging is automatically successful and there is a 1 in 4 chance of encountering animals, which can be hunted for additional food.

If you run out of food then your characters will face starvation, which means they will require more rest and will have to travel slower. They will also be penalised on their To Hit Rolls, and will lose Hit Points gradually. Eventually they will starve to death.

For every six days they spend travelling, characters need to rest for one day. If they do not rest then they will suffer a -1 penalty to their To Hit Rolls and Damage Rolls until they do.

So these are the basics of how I have decided to generate random wilderness for a solo Dungeons & Dragons campaign. I will continue to build on these concepts and I encourage you to build upon them too for your own solo DnD campaigns. I am aiming to provide the basic tools and there are still quite a few things I intend to discuss, including playing with a published campaign setting or a published module, and also playing with a full party rather than a single player character. Playing with a party will help the player balance the game and balance the individual skills of the different character classes as well as their ability scores. Old school rules are definitely unforgiving when it comes to character survival!

The example I will impart will not take a tutorial based approach. It's a podcast which I have produced and I upload episodes to my YouTube channel and they are also available on several of the main podcast platforms such as iTunes, Google, Amazon and Podbean.

The podcast is called 'Tales of Mystara' and it aims to do two things:

1. It will provide entertainment for people who love D&D (especially solo D&D) and will aim to give them that D&D 'fix'.

2. The podcast (in an entertaining and story driven form) will show how I play my solo DnD campaigns, much like these tutorials but with a focus of implementing the rules in a published setting, using published adventures.

My hope is that the Tales of Mystara podcast will give you some insight and inspiration that will help and encourage you to build your own solo campaigns. It's definitely encouraging me as I'm taking a lot of things I've covered in this blog so far and pulling it into the context of published adventures and a published campaign setting.

Quick Note: There may be some confusion caused by the video included with this article. The 'How to Play Dungeons & Dragons Solo' blog and video series will continue and I plan to cover plenty more concepts including several further concepts relating to wilderness adventures. So stay tuned!

I will end this article here with a link to the first episode of Tales of Mystara. Be sure to check back for future articles and future tutorials. See you next session.