Back in May Justin Pfeil, tweeted an illustration of Fyodor Ivanos. He absolutely captured his likeness as I imagined him! If you are a subscriber to my YouTube Channel, or my solo DnD podcast 'Tales of Mystara' then you will be familiar with my solo adventuring party. I'm going to display the incredible art that Justin has made in this blog post. Justin has drawn up several of my characters so far, and always manages to get a true likeness based on the descriptions I provide. A description of Fyodor was given on Episode 10 of Tales of Mystara.

If you aren't familiar with Tales of Mystara: Tales of Mystara is a mixture between a solo Dungeons & Dragons campaign, a dark fantasy novel and a narrated audio dramatization. The rules of the table top and the roll of the dice dictate where the story goes as well as whether a character lives or dies. Nothing is precious and no one is safe from the roll of the dice…

Here is the information from Fyodor's Character Record Sheet. Enjoy...

Don't forget to check out the brilliant work Justin does on his web comic's, which include The Keep on the Borderlands, A Duel in Padua, and a few others. Justin can be found on Twitter @comics_alert and his official website is justinpfeil.com 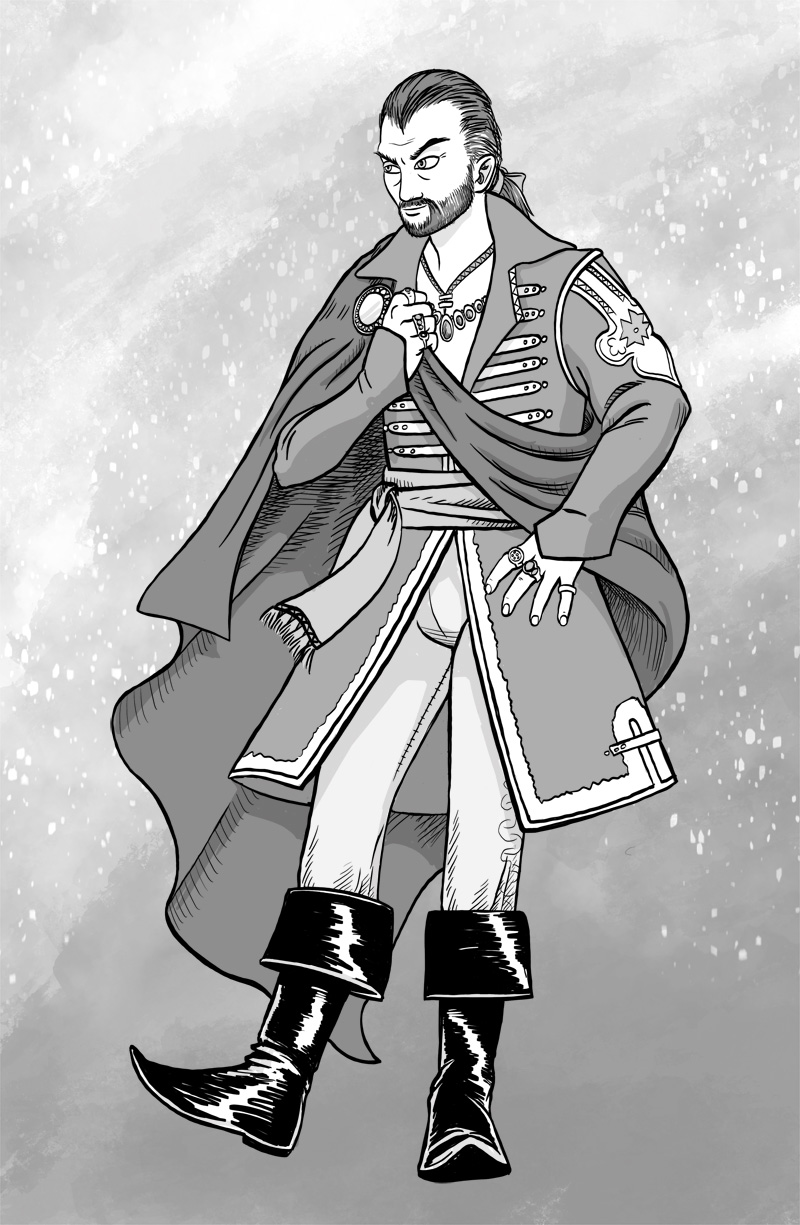 Turn to Stone or Paralysis: 13

Fyodor Ivanos is a human magic-user of neutral alignment, from a penniless background. He is Traladaran and comes from a homestead near Radlebb Woods, and wants to establish a wizards tower there. He is a very superstitious man. Although education was not widely spread amongst his homestead, Fyodor obtained a reasonable education from his grandfather and had access to books. Although many of the people he grew up with despise Thyations, because of his education, Fyodor does not share the same views.

As a dirt poor freeman, he toiled in the farmlands until his 36th year when he scraped enough money together to set out and achieve his dreams. He is now 42 years old.

Fyodor wears bright mismatching colours which include black boots with large cuffs, striking close fitting yellow trousers, a loose fitting white tunic laced at the frons, a deep green sash and a thick blue winter cloak, as well as finger rings, earrings, a gaudy brooch to secure his cloak and a heavy necklace about his neck. None of the jewelry is of expensive quality and all his clothing was handed down by his grandfather Pebarin Ivanos.

Pebarin was a well respected wizard who was driven mad by magic, and ended up penniless, but that aside, Fyodor still found his grandfather’s stories fascinating.

Fyodor’s hair is a deep brown with spatterings of grey. He wears it long, tied in a piratical ponytail. He has brown eyes, pale skin and close cut facial hair.

He carries a silver dagger at his hip, and his grandfather’s bright red saddlebag over his shoulder.

April 01, 2021
Hello solo roleplayers Tom here, welcome to my blog, ' Solo Dungeon Crawler ' and this series of article, ' How to Play Dungeons and Dragons Solo ', where I explore the concept of playing solitaire DnD using old school BECMI DnD rules. If you're well versed in the various DnD books I have perused so far, you may have wondered why I haven't included certain elements alongside some of the things I have borrowed for my solo DnD ruleset . All I will say on the matter is... All in good time. How to Play Dungeons & Dragons Solo - Part 9 - Ruins, Monuments and Fortresses, a Solo DnD Tutorial Small Dwellings and Ruins One such element, is a table given in the AD&D Dungeon Master's Guide on page 173. It's included as part of the Random Wilderness Terrain (Appendix B). Im going to make use of this now by adapting it so it no longer places well established settlements, like substantial towns or major cities, as we already have a fleshed out p
1 comment
Read more