One thing that the OD&D rulebooks does not specifically state with any clarity is exactly how spell casting works in combat. There is no mention of it in the turn sequence given in Chainmail and of course, no turn sequence is provided in any of the three OD&D books so it seems to be left to the referee to decide how best to handle spell casting.

The only rules provided that hold any kind of restriction over or clue regarding how spell casting works in regards to the turn sequence is on page 32 of Chainmail, which states "In order to cast and maintain any spell, a Wizard must be both stationary and undisturbed by attack upon his person." As well as Page 11 of Men & Magic, which states "Dexterity applies to both manual speed and conjuration. It will indicate the character's missile ability and speed with actions such as firing first, getting off a spell, etc." This latter rule is quite vague.

It would seem logical that spells are cast during the movement phase along with missile fire. Page 8 of Underworld & Wilderness Adventures states: "Surprise gives the advantage of a free move segment, whether to flee, cast a spell or engage in combat." So this would suggest spell casting happens during the movement phase, before melee resolution. The turn sequence given in Chainmail is as follows:

Swords & Spells was published just 2 years after the original Dungeons & Dragons set, so can potential be used to plug the gap and shed some light on spell casting. However to maintain as best as possible the original form of the game as it may have been played in 1974, during its earliest incarnation, I will avoid using these rules to over-rule anything stated in Chainmail or the three OD&D books.

Sword & Spells is a rule system that was written for large scale battles and unlike Chainmail it was written specifically for D&D. The turn sequence it provides along with all its rules is a complete revision of Chainmail. It cannot simply be lifted and plonked into any existing interpretation of OD&D that is already heavily based on Chainmail. 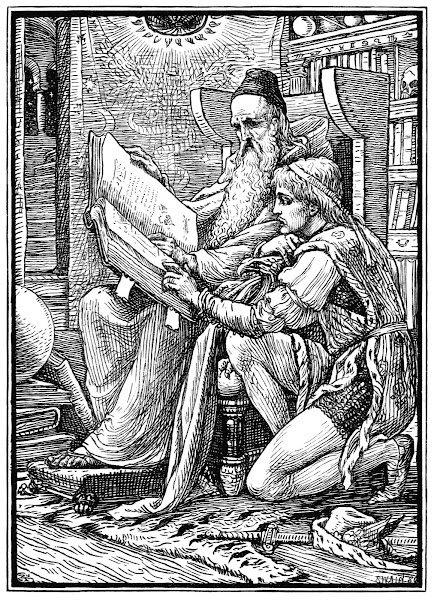 Both Chainmail and the OD&D books are silent in regards to whether a spell must be prepared before it can be cast.

There is however some rules provided in Chainmail, which are optional and concern utilising a system of spell complexity. These rules appear on page 33 and state: "Each listed spell has a complexity value, and this value indicates how difficult it is to use such a spell. [...] there may be a delay in the effect of the spell, or it may be totally negated due to some minor error or distraction. The table below gives the scores necessary for immediate, deferred (1 turn), and negated spell effects by the various levels of magic-users."

The problem with this is that a lot of the spells listed in Men & Magic do not appear in Chainmail and there is no spell complexity number given in Men & Magic, but on closer inspection I found something to rectify this issue.

There is however a further obstacle in reconciling these rules for use in OD&D as the roll required to check whether a spell is immediate, deferred or negated is dependent on the level of the magic-user, but in Chainmail only the following levels are covered:

The obvious way to convert this is simply to take these 5 categories of magic-user as level indicators and keep the numbers in the columns the same, so the rolls required in each column will be divided as follows:

The dice roll required appears to be 2d6 as is often used in the Chainmail rules. So the converted table would appear as follows: 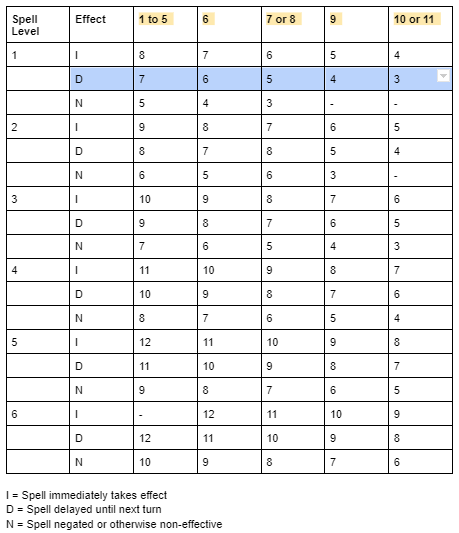 So in conclusion I believe that spell casting should appear at the start of the turn sequence as part of the movement phase and a roll should be made on the Spell Complexity Table to determine whether the spell takes effect immediately, is deferred for a turn or negated entirely. I think this sytem is true to the way spell casting is handled in an original game of Chainmail and so would be an obvious approach to an original 1974 game of Dungeons & Dragons. I will definitely be incorperating these rules into my own OD&D campaign.

April 01, 2021
Hello solo roleplayers Tom here, welcome to my blog, ' Solo Dungeon Crawler ' and this series of article, ' How to Play Dungeons and Dragons Solo ', where I explore the concept of playing solitaire DnD using old school BECMI DnD rules. If you're well versed in the various DnD books I have perused so far, you may have wondered why I haven't included certain elements alongside some of the things I have borrowed for my solo DnD ruleset . All I will say on the matter is... All in good time. How to Play Dungeons & Dragons Solo - Part 9 - Ruins, Monuments and Fortresses, a Solo DnD Tutorial Small Dwellings and Ruins One such element, is a table given in the AD&D Dungeon Master's Guide on page 173. It's included as part of the Random Wilderness Terrain (Appendix B). Im going to make use of this now by adapting it so it no longer places well established settlements, like substantial towns or major cities, as we already have a fleshed out p
1 comment
Read more