In the previous few episodes on this blog I’ve introduced some solo roleplaying rules to simulate character behaviour in order to avoid meta gaming. I’m going to expand on this further now to give you a little more insight into what goes on behind the scenes in my solo games. Hopefully this will give you some inspiration and help you with playing your own games.

Character roleplaying seems to be a significant barrier for many would be solo role players. I’ve also wrestled with this obstacle and found a solution that works well for me. Here’s how it works...

First I determine a character's alignment, which is either Law, Neutral or Chaos in BECMI D&D. Once this is decided through a roll on a d6 in my case, with 1 to 3 resulting in Law, 4 or 5 Neutral and a 6 needed for a chaotic character I then give the character a virtue, a vow and a vice. I do this for each of my characters. 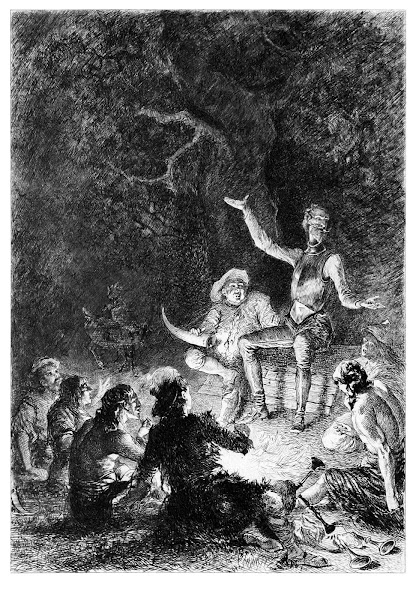 A virtue can be something like 'faith', 'charity', 'community' or “hard work” and so on. It’s basically a word to summarise a moral standard which the character holds in high regard and therefore feels compelled to behave in accordance with, whenever the opportunity is presented.

A chaotic character might have a virtue such as 'power', 'pride' or 'independence' which are not necessarily evil virtues but could compel a character down a darker path. I decide on a virtue by rolling on a table with three columns, one for each alignment and 12 virtues in each column as follows: 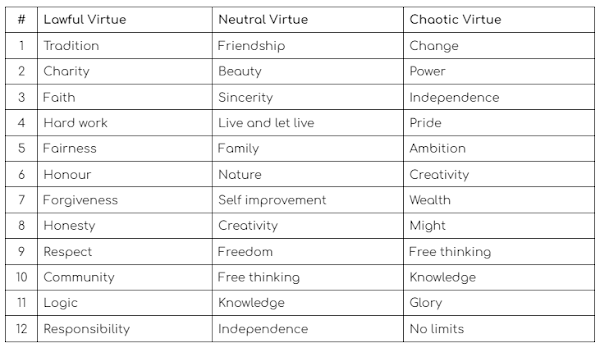 I choose a vow and a vice in much the same way, by rolling on a table. These are not tied to an alignment. A vow is a solemn promise a character has made to themselves. An example could be 'pay a debt to someone who saved your life'. The following table includes several vows in each row. Choose one from the list that you like the best. 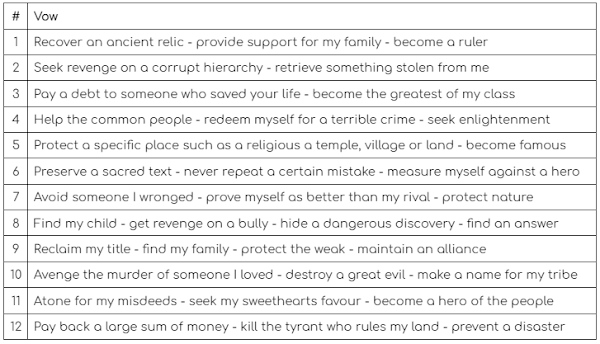 A vice represents a negative trait or immoral, wicked behaviour the character exhibits, which is essentially a weakness. An example of this could be “a need to win arguments”, or “thinking everyone is beneath me”. 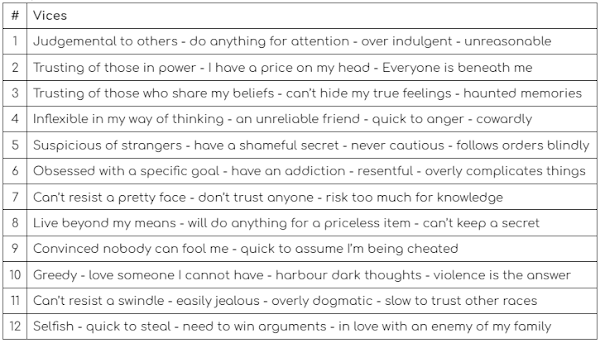 With a virtue, vow and vice in operation for each of my characters their behaviour or action in a given situation is often well informed. I also let these three v’s influence character dialogue.

There are often times when it seems natural or obvious that a character would speak up about something specific, but on the other hand without any kind of prompting it’s quite easy to forget to incorporate character dialogue into a solo Dungeons & Dragons campaign. To ensure I don’t miss this important element each time I have determined which character will act (based on rules I discussed in a previous article). I then roll on a table to determine, whether a character will speak, and if so, which topic the character will talk about. This roll is done on a d6 and on a roll of 1 to 3 the character says nothing, but if it is a 4, 5 or 6 they will speak and their dialogue will be influenced by a virtue, vow or vice. This basically gives a context that heavily influences the dialogue and in turn the dialogue reveals something about the characters personality and helps to keep them consistent.